During the two-day hearing, the company presented claims that iQOS poses less danger because the device heats tobacco, instead of igniting it, to produce an aerosol that contains 90 percent lower levels of dangerous chemicals than found in cigarette smoke.
If the agency grants the company's request and approves the product, iQOS would become the first tobacco product authorized by the FDA to be marketed as causing less harm than regular cigarettes.
Advocates and some smoking-cessation counselors urged the committee to endorse the product to make an alternative they consider to be safer available to millions of U.S. smokers. But some anti-smoking advocates question whether the device really is safer and fear it could hook more people on nicotine, including children.

Skeptics Question Philip Morris Pledge To Give Up Cigarettes


Philip Morris argued the device would be exclusively marketed to smokers and estimates the iQOS could save 90,000 lives over 20 years in the United States.
"IQOS emits toxicants and is not risk-free," Manuel Peitsch, Philip Morris' chief scientific officer, said on the opening day of the hearing. "Nevertheless, iQOS emits significantly lower levels of toxicants than regular cigarettes. Switching to iQOS can significantly reduce the risk of disease compared to regular smoking."
The device could be more appealing to many smokers than electronic cigarettes because the iQOS heats tobacco instead of a liquid containing nicotine. That gives the user more of the taste and experience of regular cigarettes, the company argues.
Critics, however, questioned Philip Morris's safety claims.
"I think the whole thing is a scam," said Stanton Glantz, a prominent anti-smoking advocate at the University of California, San Francisco, to NPR before the hearing. "When you look at the actual evidence that Philip Morris has submitted to the FDA, it doesn't support the claim that these things are any better than cigarettes in terms of health effects in people."
Glantz noted that the tobacco industry has a long history of selling products that it claimed were safer, such as cigarettes marketed as "light," "mild" or "low-tar," that turned out to be just as dangerous.
"What we're seeing is just a replay of the old light and mild scam," Glantz said.
One study conducted in Switzerland found that while the iQOS produces many toxic chemicals at lower levels than cigarette smoke, some are higher than the company claims. Philip Morris disputes that research.
Some of the chemicals found are components of smoke, the researchers say. "We found lower concentrations of these compounds; however, we found them. And because we found them, we think this is smoke," Reto Auer, an assistant professor at the University of Bern in Switzerland who conducted the study, said in an interview before the hearing. "We disagree with the claim that it's smokeless. People should be aware there are still toxic substances in the iQOS."
Auer and Glantz's concerns were echoed by several people who spoke during a public comment period on the second day of the hearing. 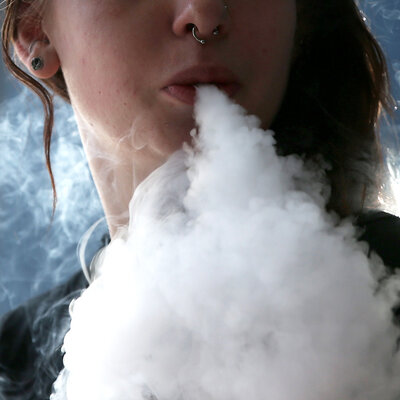 The iQOS looks suspiciously similar to the most popular e-cigarettes among children, Matthew Myers, president of the Campaign for Tobacco-Free Kids, told the committee.
"It is high-tech. It is sleek. It is designed in exactly the way that would appeal to young people," Myers told the committee.
If the iQOS were approved, it could hook children and teenagers on nicotine, reversing the progress that has been made to reduce smoking among young people, Myers fears.
But most of the speakers at the hearing urged the committee to recommend approval to give smokers a potentially safer alternative to cigarettes. More than 36 million Americans currently smoke.
"There is no health threat that compares to smoking," said Hank Campbell, president of the American Council on Science and Health. "Even though we have been opposed to smoking for 40 years, we support these devices."
"Patients who smoke clearly need more tools to help them quit," said Jeff Fortenbacher, president and CEO of Access Health in Muskegon, Mich.
In an interview before the hearing, Jonathan Foulds, a professor of public health sciences and psychiatry at Penn State University, agreed.
"I think it's a step in the right direction for tobacco companies to be developing products that have the probability of being significantly less harmful than conventional cigarettes," Foulds says.
Philip Morris is already selling iQOS in more than 30 countries and argued there was no evidence it was enticing children to use the product or start smoking. In fact, the company said, cigarette smoking had dropped dramatically since the device was introduced in Japan.
The iQOS consists of several parts. One part is called a "heatstick," which is made from compressed wads of tobacco. If approved, three versions would be sold: Marlboro HeatSticks, Marlboro Smooth Menthol HeatSticks and Marlboro Fresh Menthol HeatSticks.
The iQOS device is reusable, but the heatsticks are not.
Users would insert a heatstick into a holder that has a blade that penetrates the middle of the tobacco wad. When the user presses a button, the blade heats the tobacco to temperatures only capable of producing an aerosol that contains nicotine, according to the company.
The tobacco never gets hot enough to combust, according to Philip Morris. Burning tobacco produces far greater levels of potential toxic substances than just heating it, the company says. The devices stay on for six minutes or 14 puffs, whichever comes first, before shutting off automatically.
Philip Morris hasn't said how much the device would cost in the United States. But in Japan, the device sells for about $80, and a pack of heatsticks costs about the same as a pack of cigarettes. 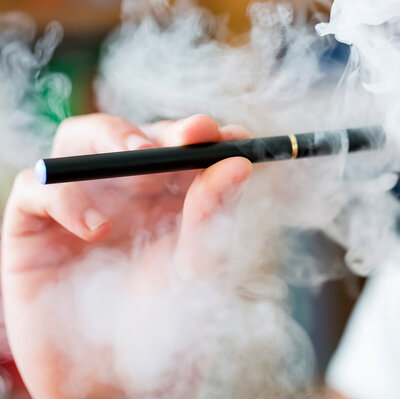 The FDA advisory committee's recommendation Thursday pertains only to the company's claims about the safety of the product. Philip Morris would still have to get the FDA to sign off on a separate application to actually sell the devices in the United States for the first time.
The hearing comes after the FDA announced plans to eventually reduce the amount of nicotine in regular cigarettes in the hopes of weaning more Americans off cigarettes. As part of that effort, the FDA has said the agency hopes to offer more alternative sources of nicotine that would be safer than cigarettes.
Separately, the FDA has begun reviewing the safety of electronic cigarettes. Those devices heat fluid containing nicotine to produce a vapor that users inhale. E-cigarettes have become increasingly popular, especially among young people. The growth in use has alarmed many public health experts.
While e-cigarettes may be safer than regular cigarettes, experts say e-cigarettes aren't completely safe and fear they are hooking a new generation of children on nicotine and acting as a gateway to traditional cigarettes.
https://www.npr.org/sections/health-shots/2018/01/25/580213742/fda-panel-gives-qualified-support-to-claims-for-safer-smoking-device?utm_source=npr_newsletter&utm_medium=email&utm_content=20180125&utm_campaign=breakingnews&utm_term=nprnews
प्रस्तुतकर्ता virendra sharma पर 11:25 am कोई टिप्पणी नहीं: 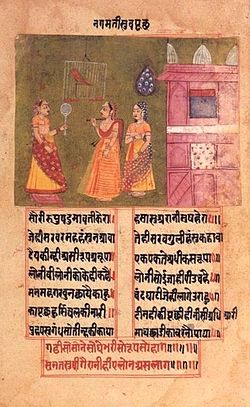 "Queen Nagmati rashly asks her new parrot who is more beautiful, she or his former owner Princess Padmini of Sri Lanka. Naturally, she gets a displeasing answer." An illustrated manuscript of Padmavat, c. 1750[1]
Padmavat (or Padmawat) is an epic poem written in 1540 by Sufi poet Malik Muhammad Jayasi,[2] who wrote it in the Hindustani language of Awadhi,[3][4] and originally in the Persian Nastaʿlīq script.[5] It is the oldest extant text among the important works in Awadhi.[6] A famous piece of Sufi literature from the period, it relates an allegorical fictional story about the Delhi Sultan Alauddin Khalji's desire for the titular Rani Padmini, the Queen of Chittor.[7] Alauddin Khalji and Padmini's husband Ratan Sen are historical figures, whereas Padmini is a fictional character, though this is disputed.[8]

Rani Padmini, the princess of the Singhal kingdom, is close friends with the talking parrot Hiraman. Her father disapproves of their closeness, and orders the parrot to be killed. The parrot flies away to escape the punishment, but is captured by a bird catcher, and ultimately ends up as a pet of the Chittor ruler Ratansen.[9]
Inspired by the parrot's description of Padmini's beauty, Ratansen decides to visit the Singhal kingdom. Joined by his 16,000 vassals and princes, and with the parrot as his guide, he reaches Singhal after crossing the seven seas. There, he tries to win Padmini by performing austerities in a temple. Informed by the parrot, Padmini visits the temple and returns without meeting Ratansen, although she begins to long for him. Meanwhile, at the temple, Ratansen decides to commit suicide for having missed her.[9] The deities Shivaand Parvati intervene, and Shiva advises him to attack the fortress of Singhal.[10]
Disguised as ascetics, Ratansen and his followers attack the fortress, but are captured by Gandharvsen. As Ratansen is about to be executed, his bard reveals his identity. Gandharvsen then marries Padmini to Ratansen, and also arranges 16,000 padmini women for his companions.[10] (Padmini is best among the four types of women, typically found only in Singhal.[11])
As Padmini and Ratansen consummate their marriage in Singhal, Ratansen's first wife Nagmati longs for him in Chittor. She uses a bird to send a message to Singhal, following which Ratansen decides to return to Chittor. Ratansen has excessive pride in being married to the most beautiful woman on the earth, for which he is punished by a sea storm during the return journey. He and Padmini are rescued by the Ocean, but all their followers die in the storm. Lakshmi, the daughter of the Ocean, tests Ratansen's love for Padmini by appearing before him disguised as Padmini. Ratansen passes the test, and is rewarded with gifts by the Ocean and Lakshmi. With these gifts, he recruits a new entourage at Puri, and returns to Chittor.[10]
In Chittor, Padmini and Nagmati rival for Ratansen's attention. Initially, he placates them by spending nights with them alternately, but then establishes peace by reprimanding them. Meanwhile, he banishes the Brahmin courtier Raghav Chetan for fraudulently winning a contest. Padmini gifts Raghav her bangle in order to placate him.[10]
Raghav goes to the court of Alauddin Khalji in Delhi. When asked about the bangle, he describes the unmatched beauty of Padmini.[10] Alauddin then besieges Chittor, and demands Padmini for himself. Ratansen rejects the demand, offering to pay a tribute instead. Alauddin rejects the offer, and the siege continues. Finally, as part of fresh terms of peace, Ratansen invites Alauddin as a guest inside the fort, against the advice of his vassals Gora and Badal. Alauddin deceitfully catches a glimpse of Padmini, captures Ratansen, and returns to Delhi.[11]
Padmini asks Gora and Badal to help her free Ratansen. The two men and their followers enter the fortress of Delhi, disguised as Padmini and her companions. They free Ratansen, but Gora is killed fighting during the escape, while Badal takes Ratansen to Chittor.[11]
During Ratansen's absence, the Kumbhalner ruler Devpal proposes marriage to Padmini. On his return, Ratansen learns about this insult, and decides to punish Devpal. In the ensuing single combat, Ratansen and Devpal kill each other. Nagmati and Padmini commit suicide by sati (widow's self-immolation) on Ratansen's pyre. Meanwhile, Alauddin's army reaches Chittor. Facing a certain defeat, the women of the fort commit suicide by jauhar (mass self-immolation), while the men fight to death. Alauddin captures an empty fortress, thus denied victory.[11]
The victorious Alauddin reflects on his Pyrrhic victory, and the nature of insatiable desire. He picks up the ashes of Ratansen and his wives Padmini and Nagmati, lamenting that he "wanted to avoid this". Alauddin continues, "Desire is insatiable, permanent / but this world is illusory and transient / Insatiable desire man continues to have / Till life is over and he reaches his grave."[12]
प्रस्तुतकर्ता virendra sharma पर 8:55 am कोई टिप्पणी नहीं:

Hearing is the most social of the senses(HINDI I )

hearing is the most social of the senses .